I grew up in , my family moved there when I was 2 months old, and at the age of 16 I left the city to live in the "big land". So, although I was born in Irkutsk, I think of Yakutsk as of my home town. I would like to tell about this place and about what makes the life in Siberia and Far North so very different from other parts of Russia.

So, first and foremost, it's the distances. Yon can drive for many ours and even days, and meet not a single village, the only thing around is "the limitless sea of tayga".

Second, it's the climat. If in Western Siberia winter lasts for 5-6 months (from November till March-April), in Yakutia it's all 7 (from October to April). All these factors affect on the lifestyle and even on the character of people. 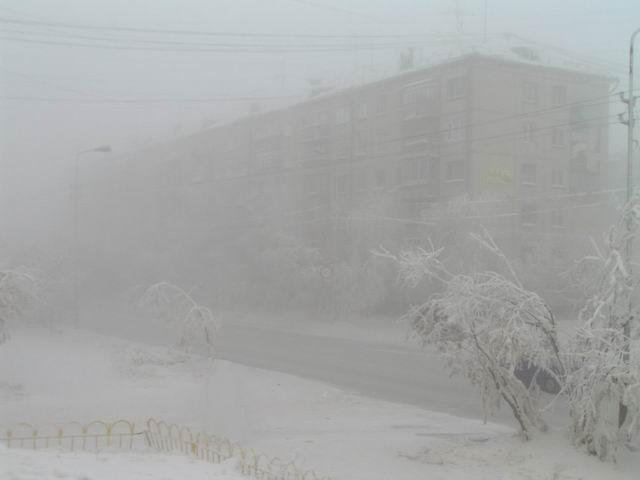 In winter Yakutsk is almost always in fog. This is how it looks in the daylight. Before 9 a.m. and after 16.00 p.m. it's dark on the streets.

You walk out of the lobby, try to make a breath... If you can't, then it's definitely below -40 C (-104 F). It's hard to describe the smell of the extreme cold, it's something similar to the ozone after the rain.

That's how the citizens look in Winter: 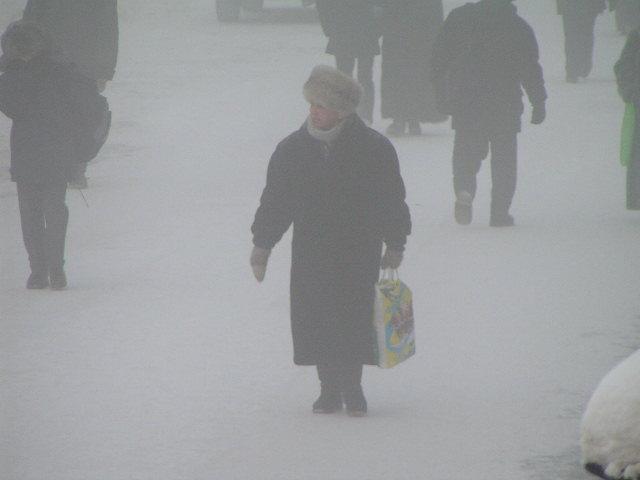 And that's how they inwrap kids into warm clothes: 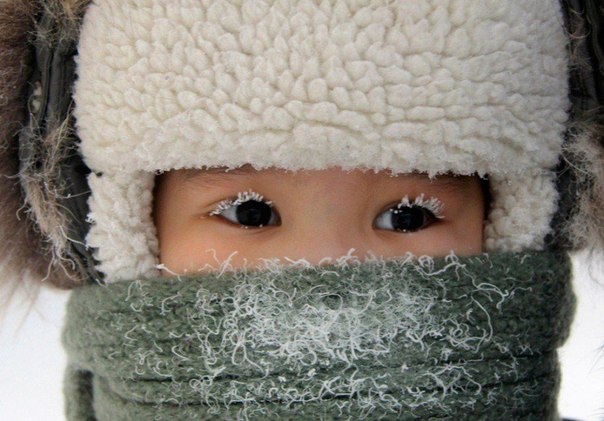 Because of such a long and severe winters, ground in Yakutsk is deep frozen, and that's why it is said that Yakutsk is in the zone of permafrost, in which mamoths remain intact, and where it is very hard to build anything.

Here is a statue of mamoth in front of the Insitut of Permafrost Studies. 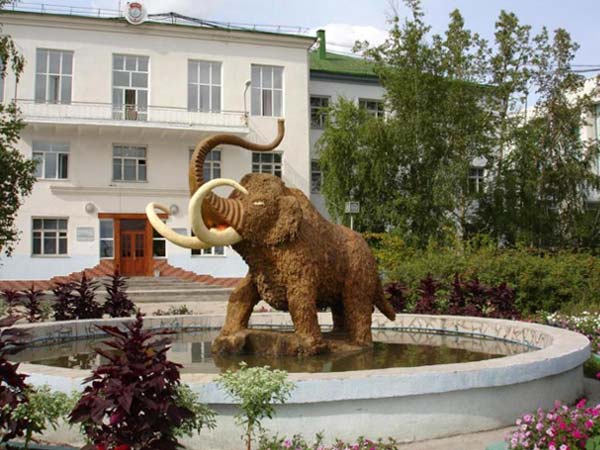 As for the construction, it's necessary to build according to typical pile housing projects designed especially for Far North. The houses stand so high on piles that you can walk under them. It looks approximately lake this: 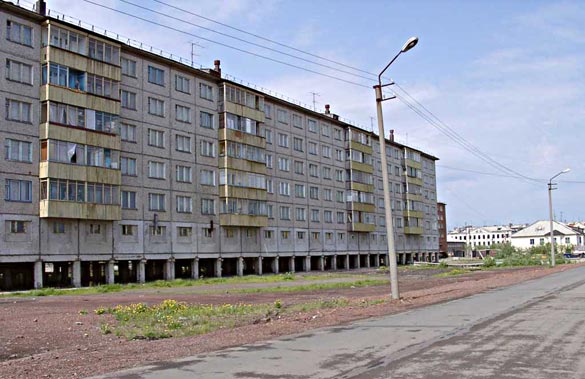 Yakutsk was founded in 17th century, but despite such a considerable history, the town almost has no old buildings. Probably, the reason is that for a long time it was no more than a temporary station on the way of the soldiers coming to the East. Yakutskiy ostrog (Burg of Yakutsk) was moved several times, before it finally found its place. As a result, from that times remain only one tower and several structures. 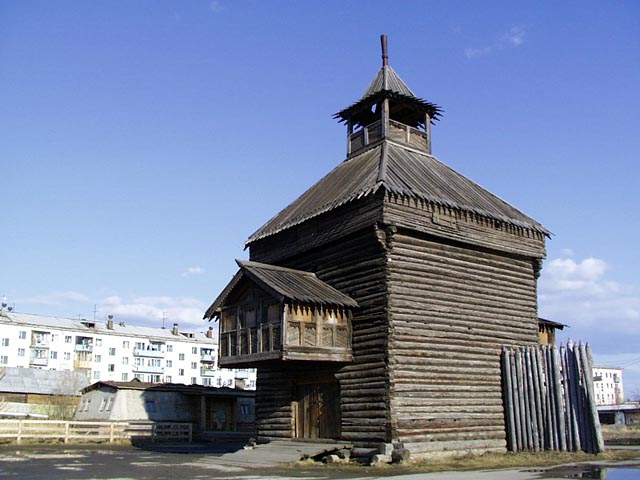 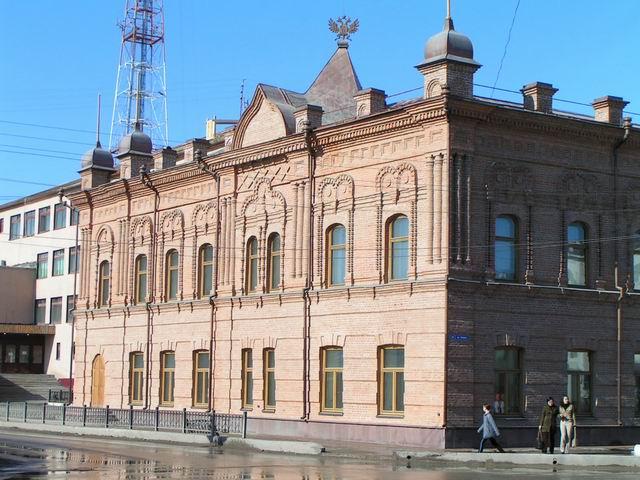 A touch of temporality persisted in Soviet time too: people went to Yakutsk by assignment, for earnings. It's not the same as work on rotation scheme, but still the most of the inhabitants of Yakutsk had their ancestors burried in other places, and they knew that their children are not likely to stay in the city.

But strangely only few of Yakutsk people lived like real rotation workers making shift with only the most necessary things. The rest had time to really love this city. Great spaces, possibility to work out of system attracted plenty of interesting people who stayed in the city for a long time, took roots in this land, because the life there was more free. Back in the 90-ties, government cancelled most of the Northen preferences and wage premiums, and that made serious part of Russian speaking population to leave the city. On their places came local people from the country-side, immigrants frome Middle Asia and China. Maybe, this had some positive effect: stayed only those who really wanted to live there. And if people know, that their children and grandchildren are to live in Yakutsk, they would take more care of it...

However, modern Yakutsk, just like any many major city of Russia, boasts good hospitals, educational programms that allow students to enter the best universities of the country and study abroad, there are offices of the major companies, concert halls, etc.

Check out this video clip of an Yakutian artist Zloi Mambet ("Evil Redneck") that will give you general idea of life in this Northen city. The song is performed in mixture of Yakutian and Russian language.

And here are some pictures of Yakutsk in winter. 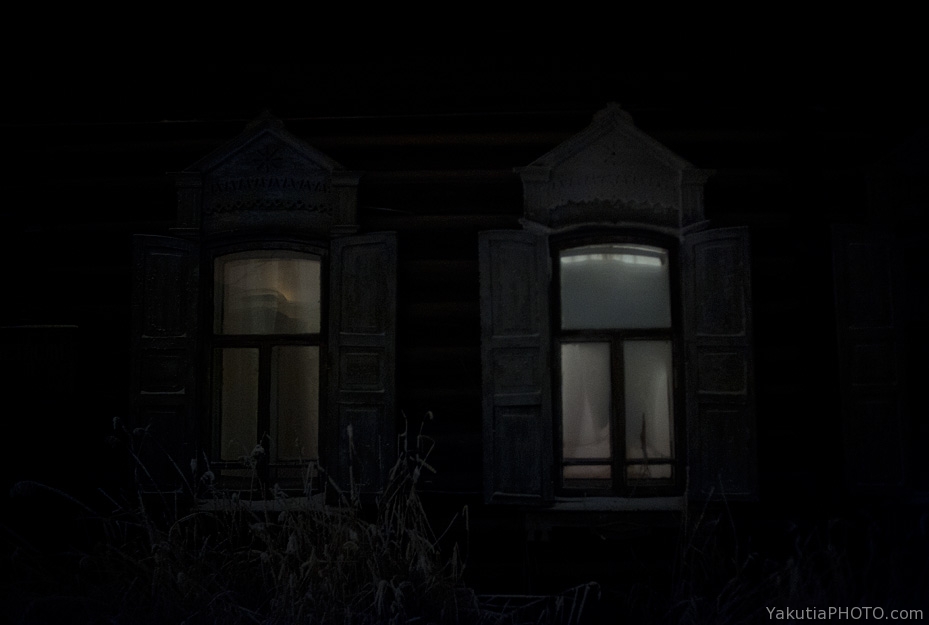 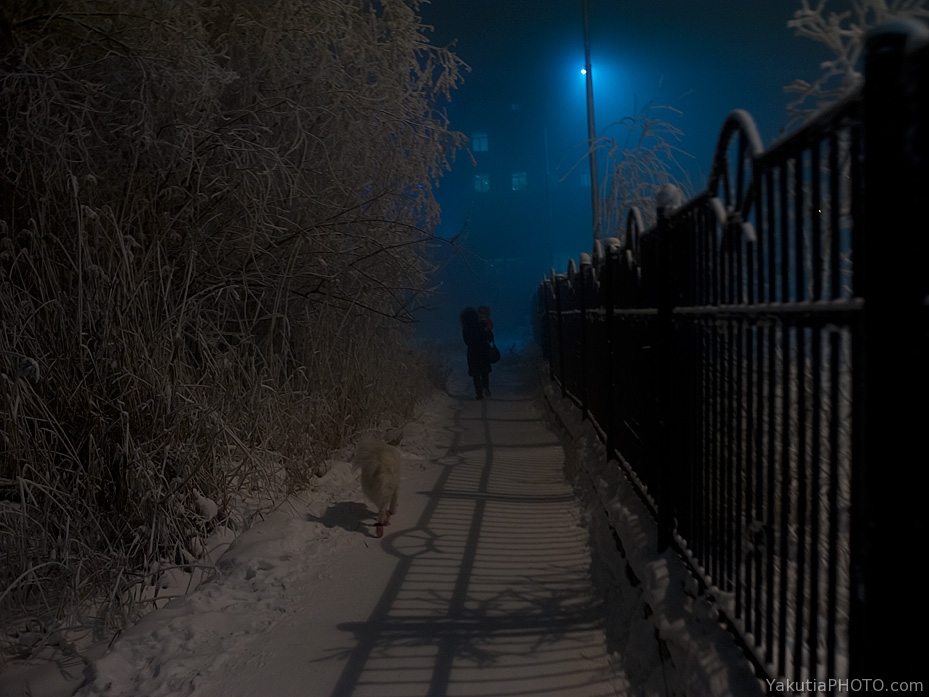 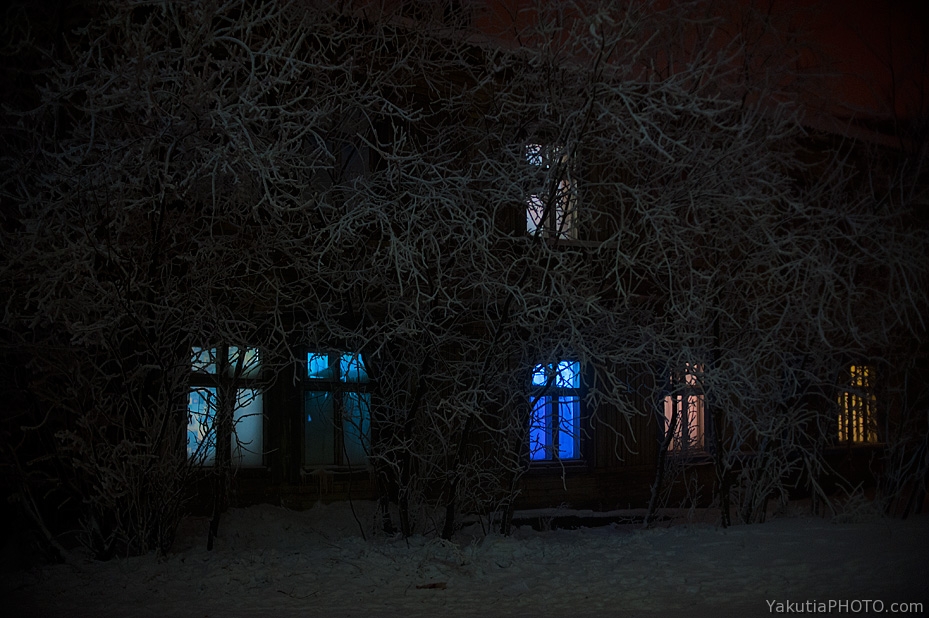 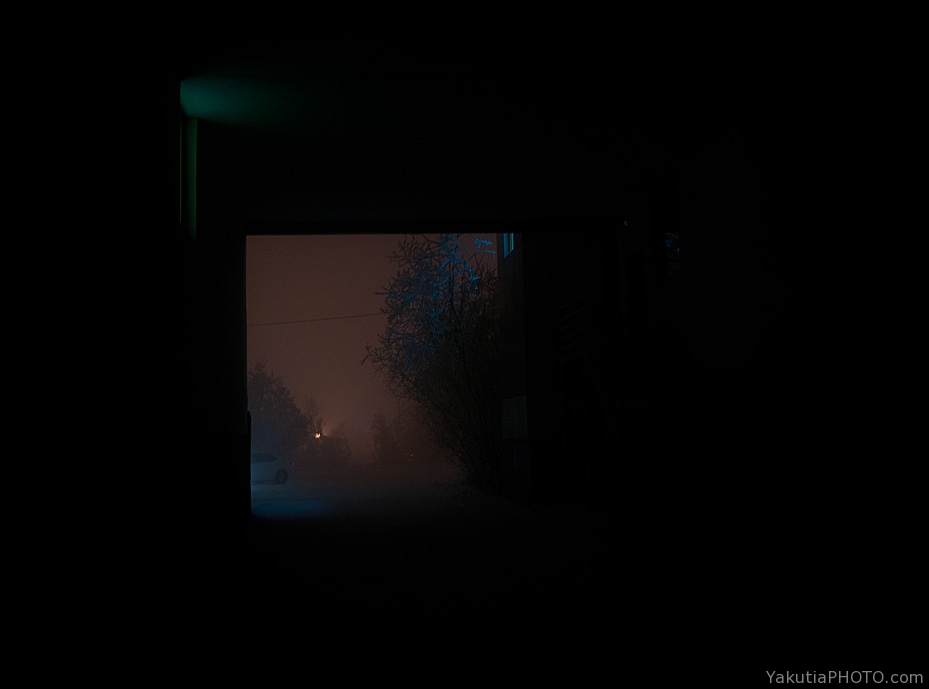 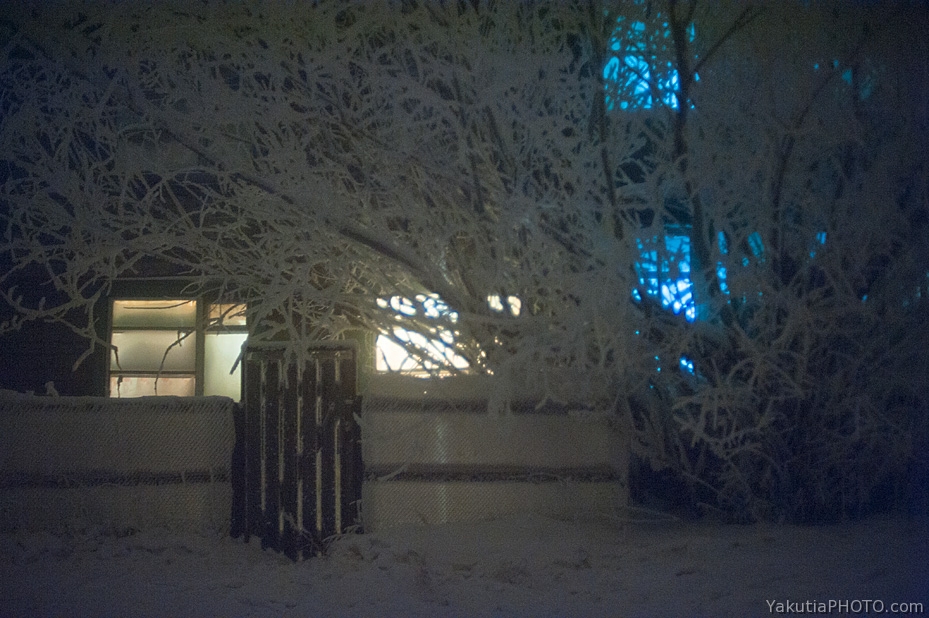 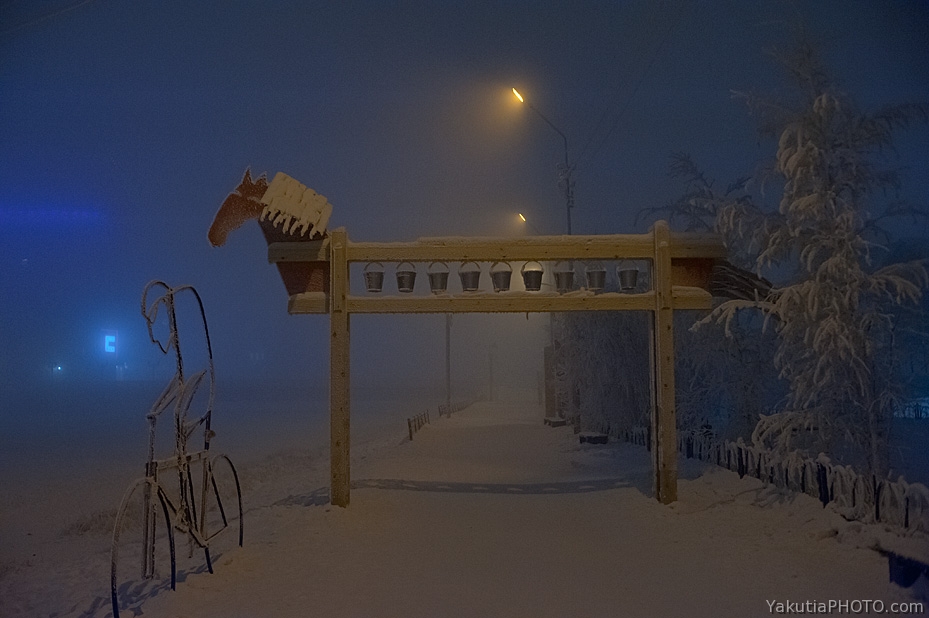 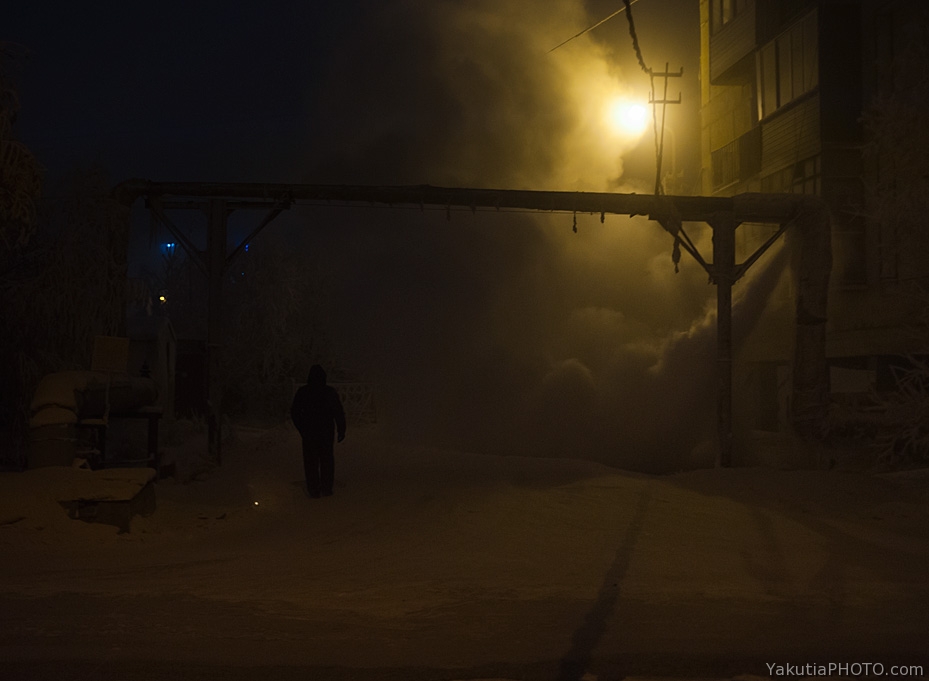 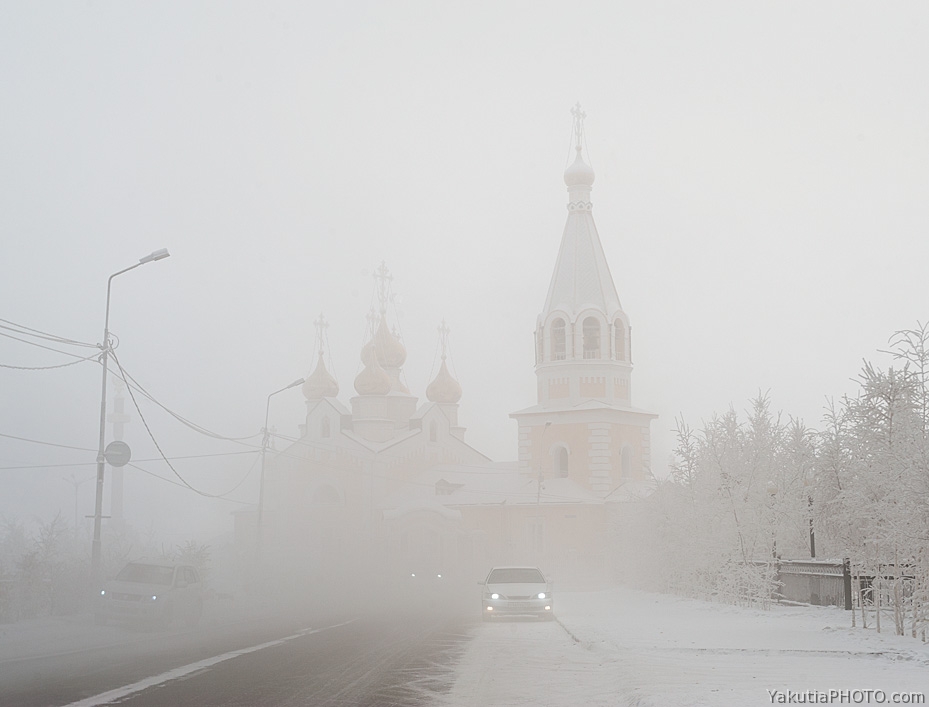 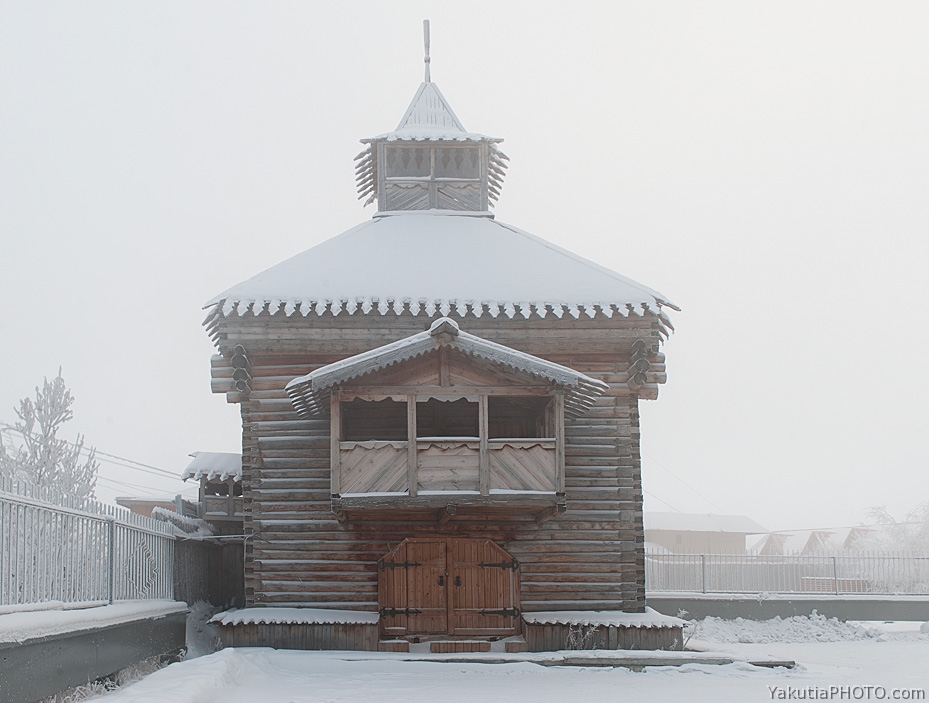 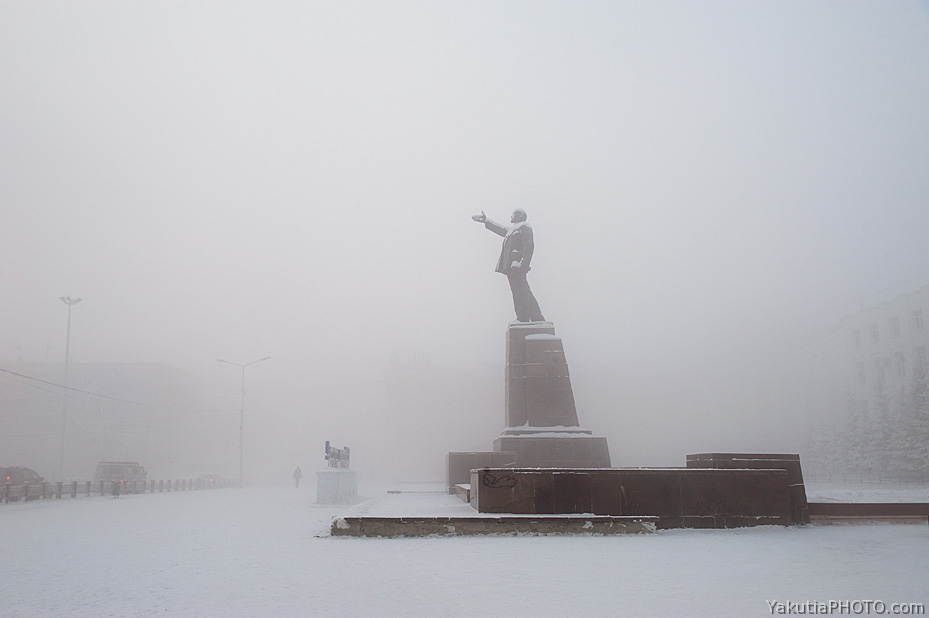 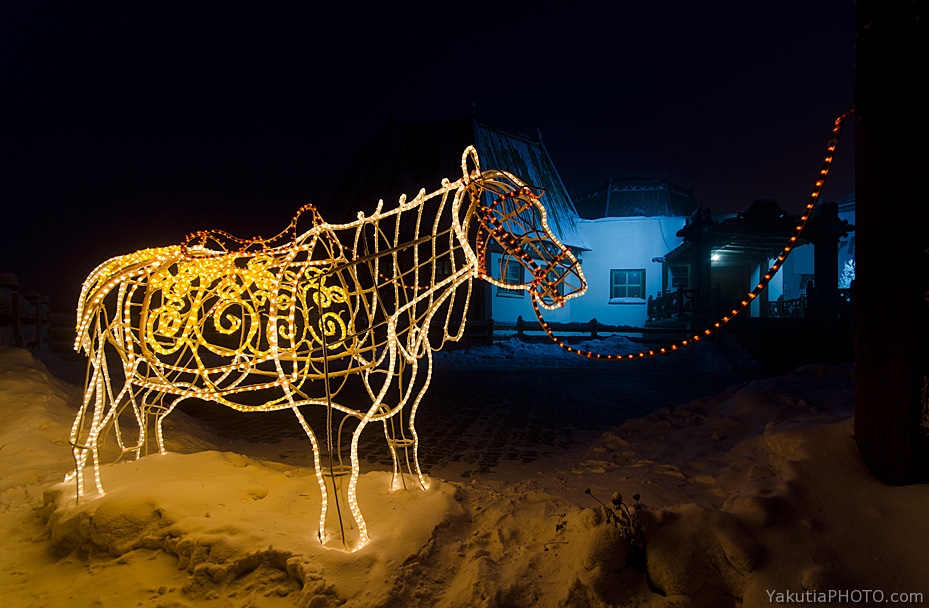 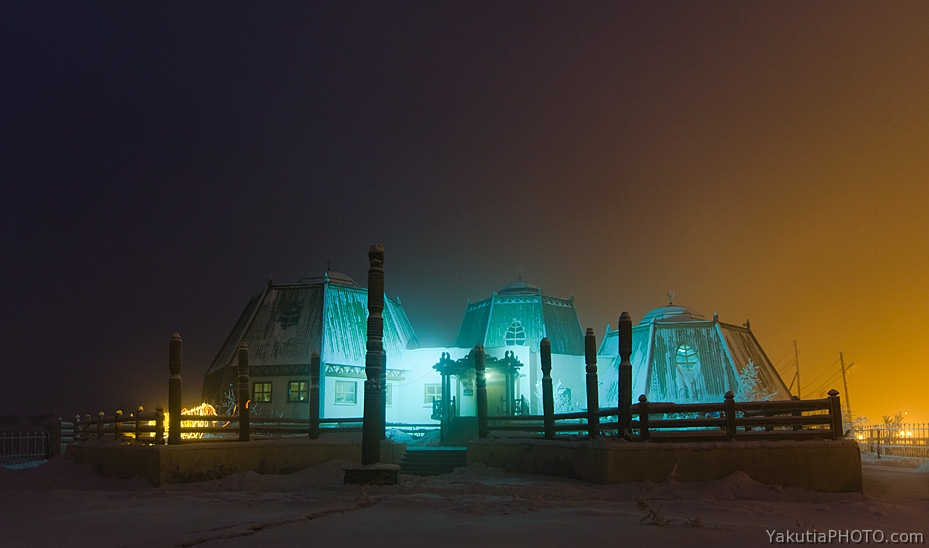 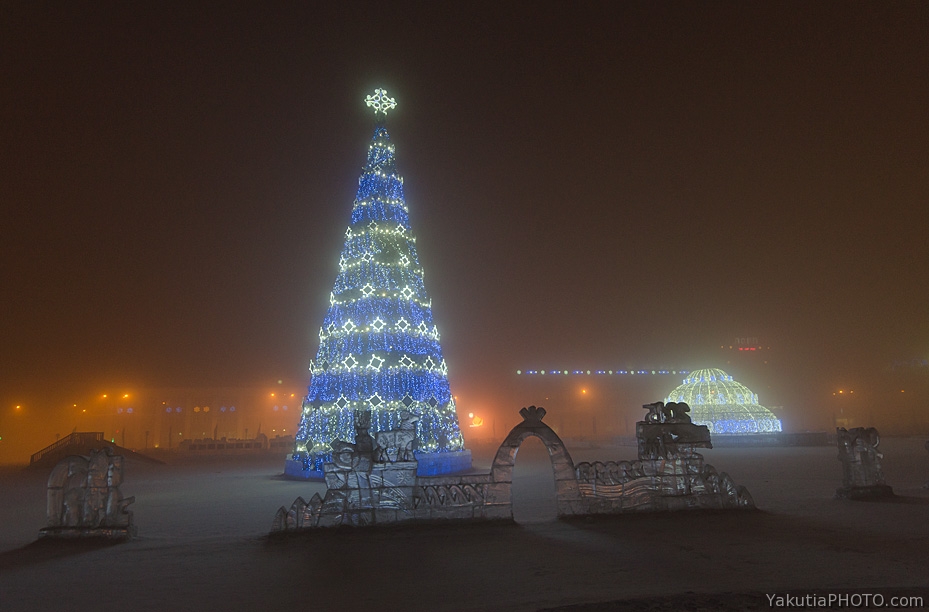 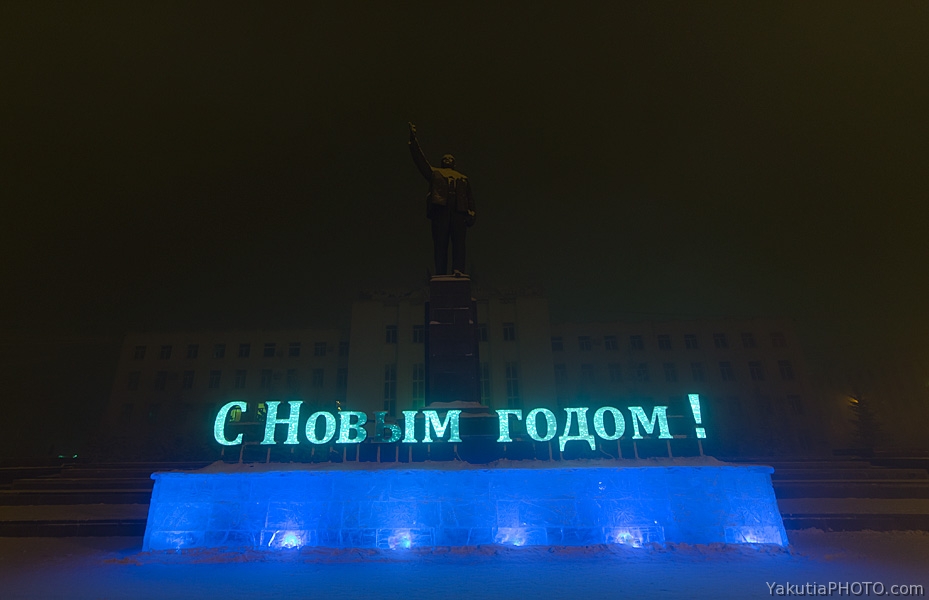 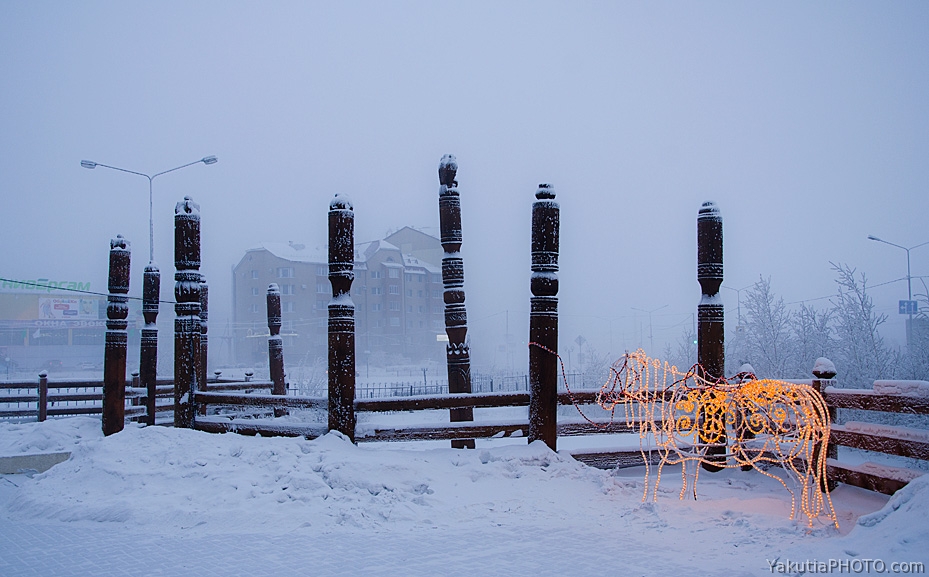 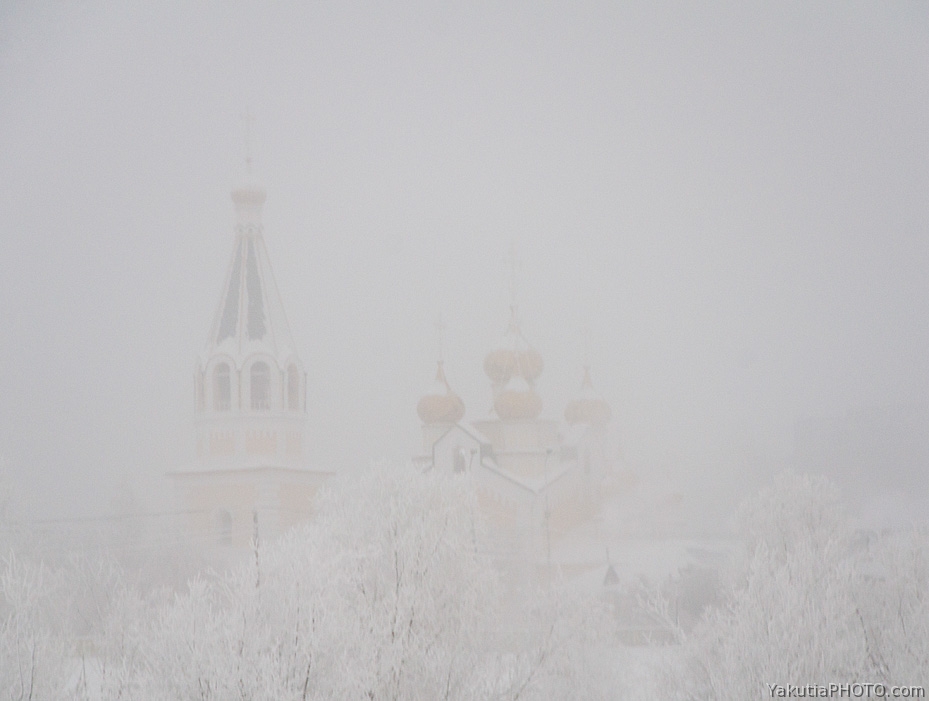