Kazan is the capital of the republic of Tatarstan and is a beautiful and interesting city. It is home to the Tatars - descendants of a nomadic Turkic tribe and part of the Golden Hoarde that wreaked havoc across Russia in the middle ages. 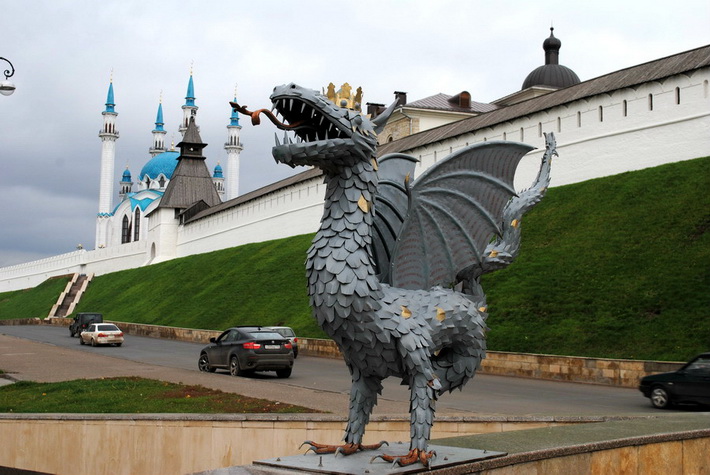 You will see bilingual street signs and the green, white and red Tatar flag fluttering throughout the city, giving it a different atmosphere to other Russian cities. Ivan the Terrible conquered Kazan in 1552, building St Basil's Cathedral in Moscow as a celebration of the fact.

Ivan forced the local muslim population to convert to Christianity, but now you will see mosques in the city. The Kremlin is the jewel in Kazan's crown and was declared a UNESCO World Heritage Site in 2000. A stroll within its walls is a must when visiting this historic city.

Kazan has always been special for its architectural "layered cocktail." Each century poured a new ingredient into this divine drink. Here, the ancient Suyumbika Tower stands along with the "Pyramid", the ultra modern entertainment center, and the white-stone Blagoveshchensky Cathedral adjoins the Kul Sharif Mosque, built four and a half centuries later. The Mannerist splendor of the Naryshkin baroque (the Peter and Paul Cathedral) coexists with the chaste classicism (the main Kazan University building).

Must- See Places in Kazan 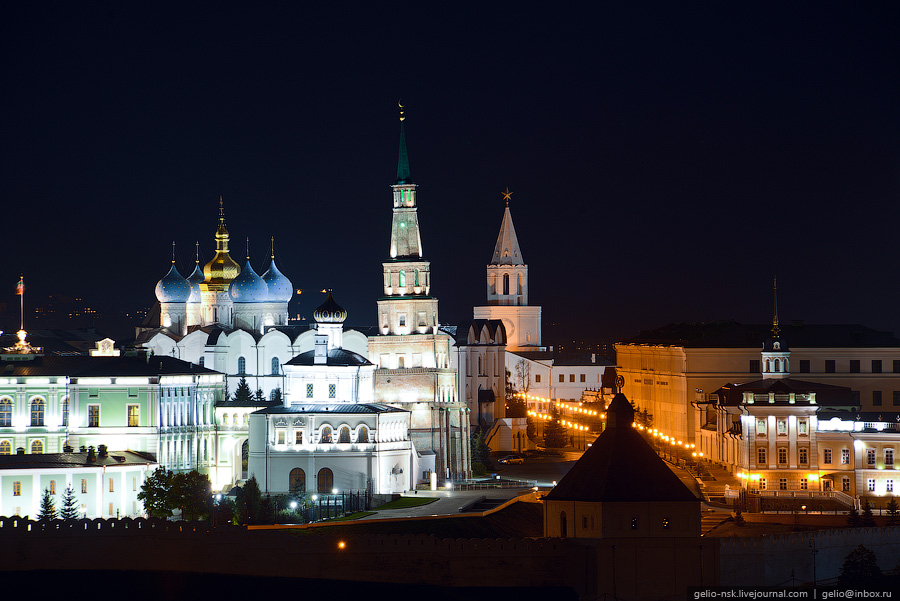 The white-stone fortress is the central part of Kazan which is also protected by UNESCO as an object of cultural and architectural value for all humanity and it is the very location where Kazan began. The original wooden fortress was destroyed in 1552 when Kazan was conquered by Russian armies therefore was replaced with the one made of stone by the Pskov and Nizhny Novgorod masters. It’s better to enter through white Spasskaya Tower where the most famous clock in Tatarstan is situated and a monument to Tatar poet Musa Jalil opposite. 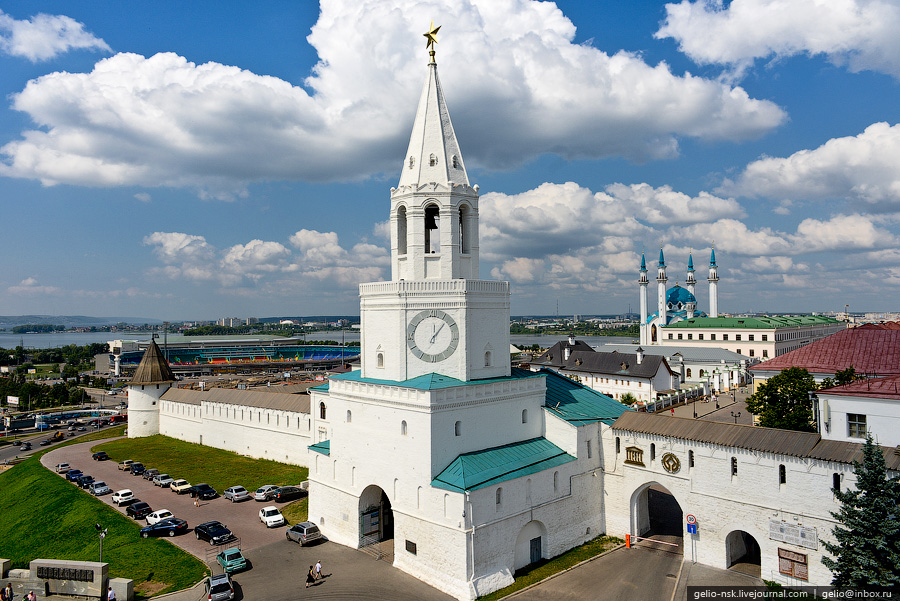 Then you can proceed to the former Yunkersky School which is now the art gallery called and see the Hermitage. 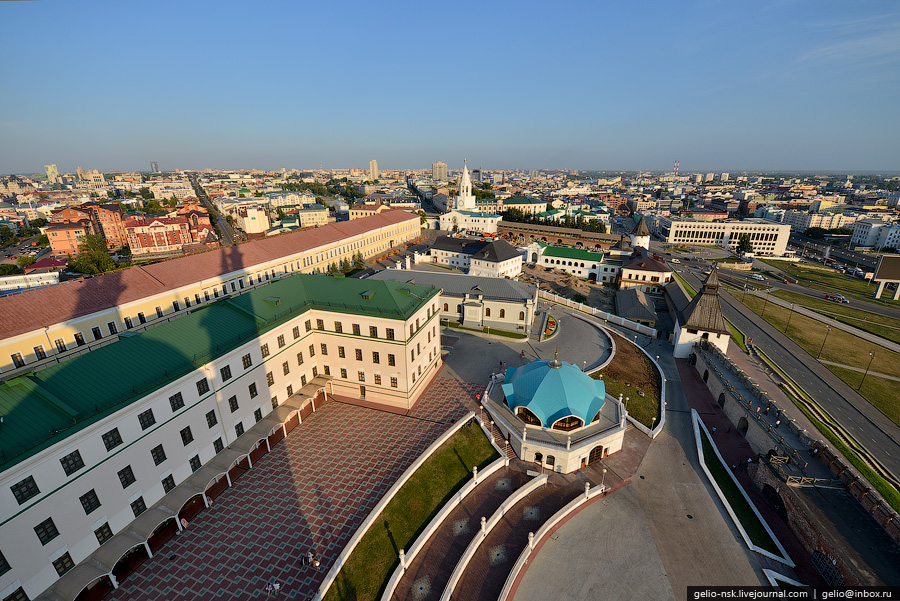 Also in the grounds of the Kremlin is Tatarstan’s main mosque the Kul Sharif which was rebuilt in 2005... 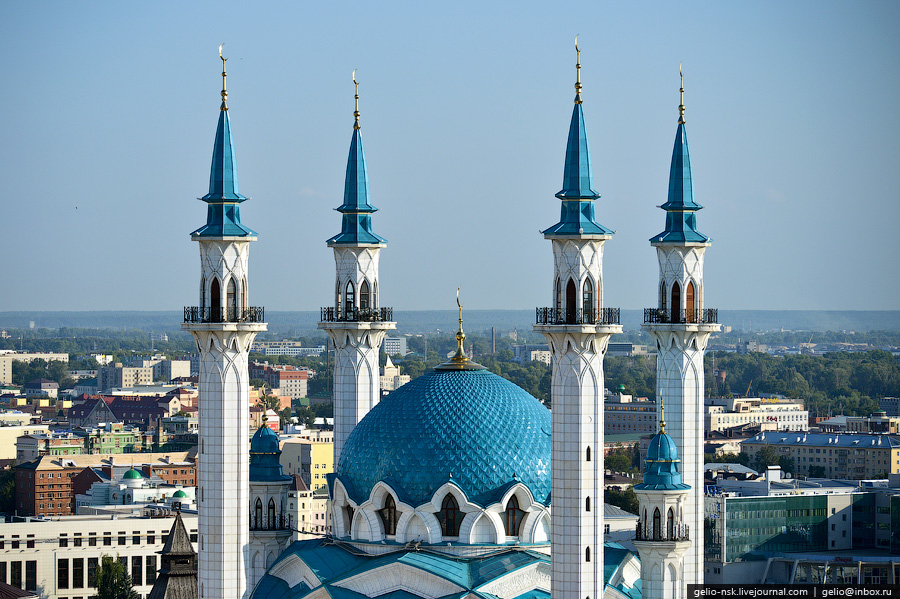 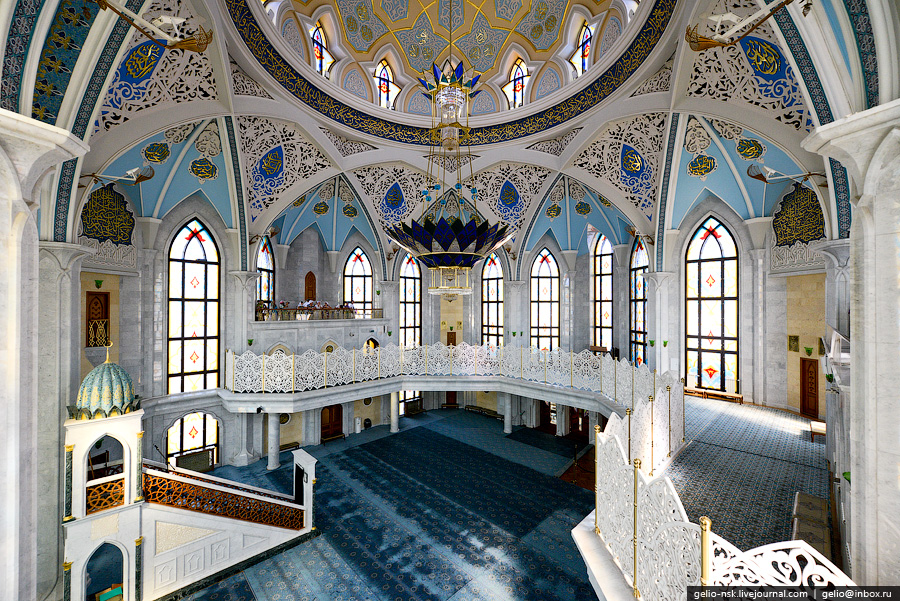 ...as well as the Blagoveschensky Annunciation Cathedral which was built in 1552 and took 10 years to complete. 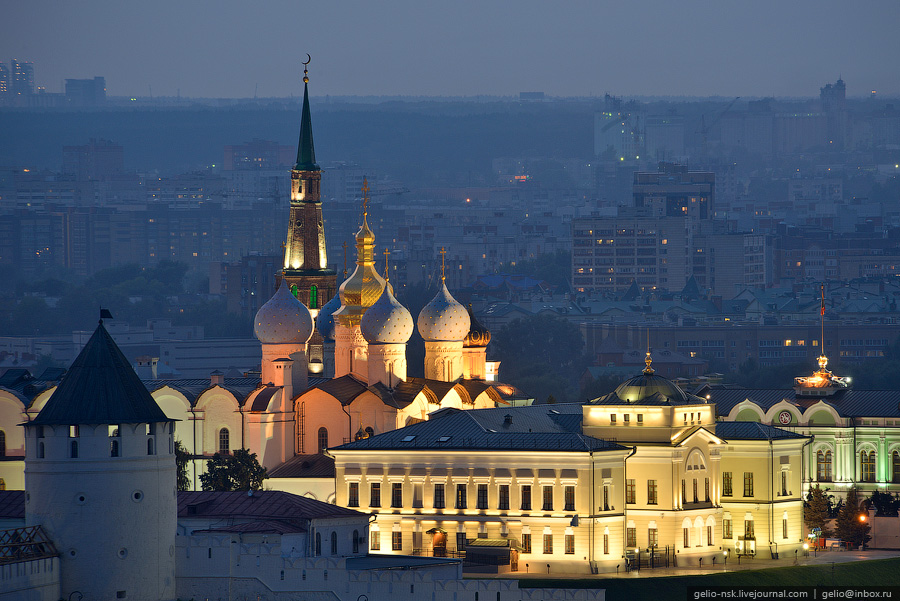 Whilst there you can see the President’s Palace and the leaning tower of Suyumbike, one of Kazan’s main symbols. 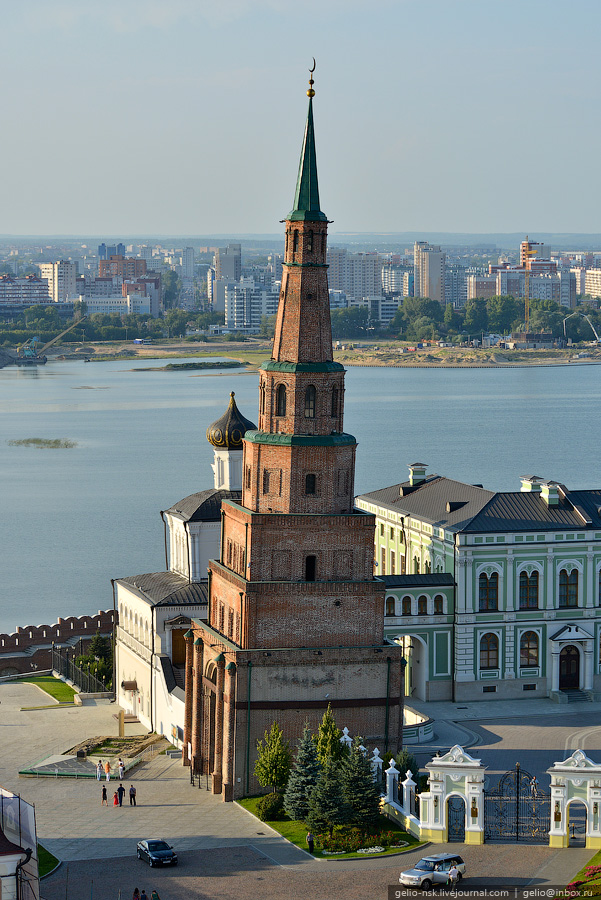 If you go back to Kremlin street, you can also see the Tatarstan National Museum. 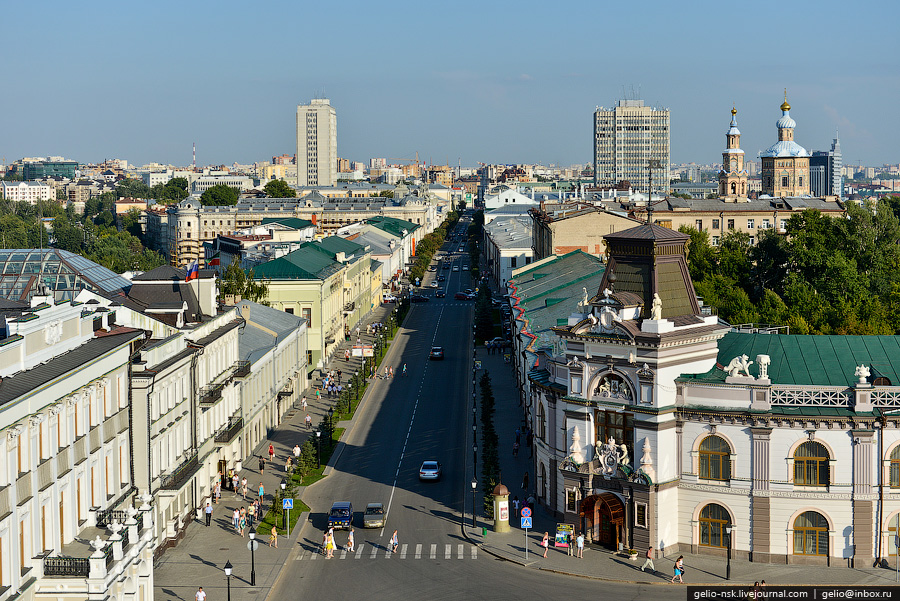 Then as you head away from the Kremlin towards the buildings of Kazan (Volga Area) Federal University (former Kazan State University), and pass the Central Post Office there is a beautiful building on your left which houses the National Library. 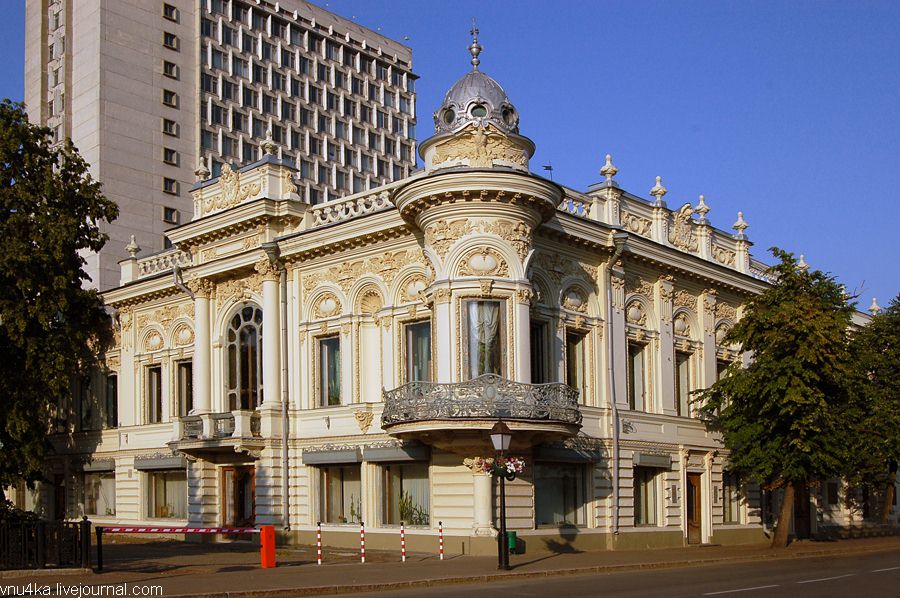 Before 1919 it was known as Ushkova’s house, it boasts stained glass from Paris and features styles including Empire, Gothic and Chinese it was built as a gift for his sister. 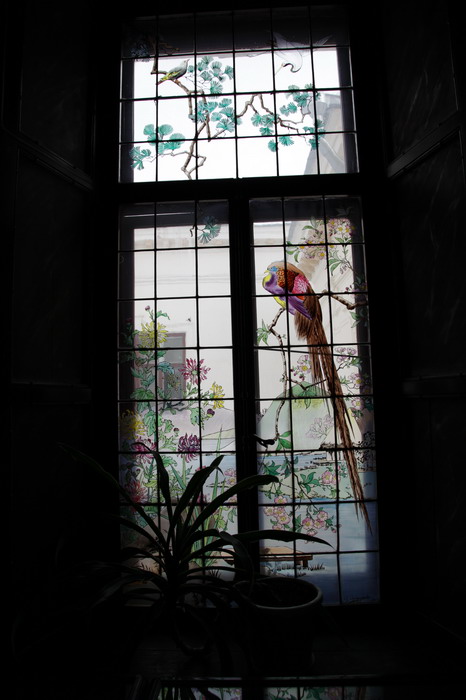 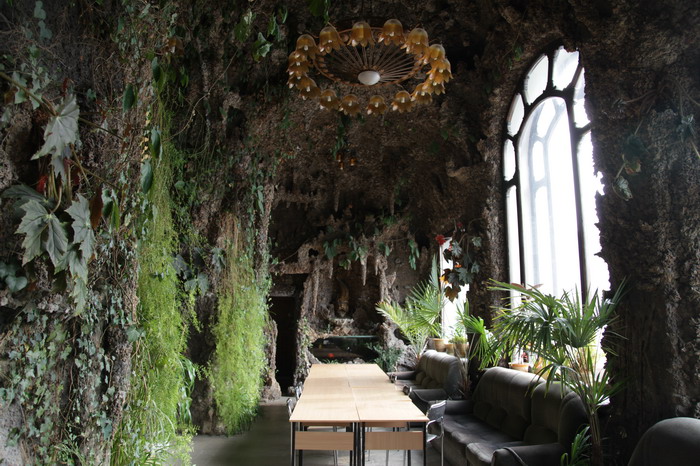 The University, the third oldest in all of Russia, an alma mater to many world-famous scientists as well as renown Bolshevik leader Vladimir Ulyanov–Lenin.

Going through (or driving by) Chernoe Ozero Park which means Black Lake, you can easily reach the central city square. 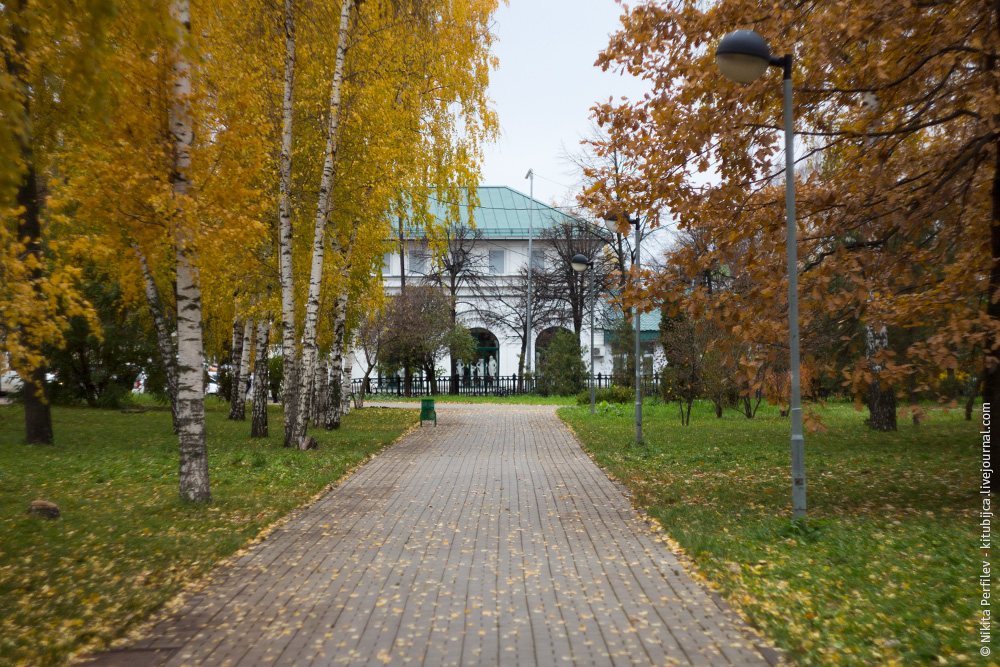 There are some of the most important cultural and government buildings with this square. The Tatarstan State Council and the Cabinet of Ministers are working premises. Kazan City Hall (former Nobility Assembly) hosts both administrative and cultural events, The Opera and Ballet Theatre which was named after the famous Russian bass Fedor Shalyapin is a home to a lot of world-famous festivals of opera and ballet (named in the honor of Rudolf Nureev) , and main Concert Hall has an impressive organ, which is the third largest in Europe.

Down along the Pushkin street from the Freedom square you reach Koltso (the Ring) shopping centre where there is plenty of busy with traffic and the beginning of the Bauman pedestrian street (which may remind you of the Moscow Arbat). 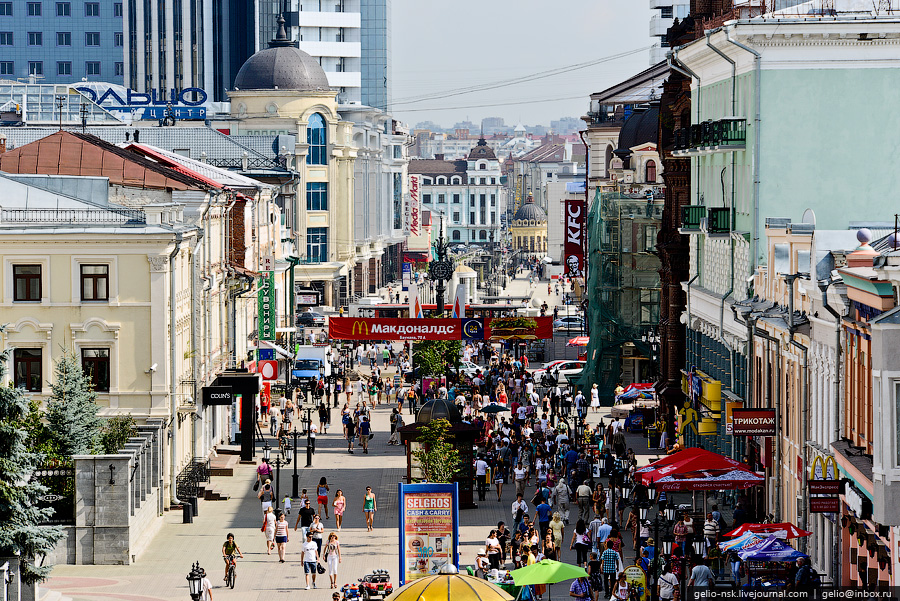 It is a place to watch other tourists, buy local souvenirs and see lots of youngsters entertaining themselves. The street opens up with its famous Clock, which doubles a popular place as a meeting point, then a monument to Shalyapin close to the church where he was baptized, the first Kazan McDonalds which opened in 1998 and for those wanting a restaurant for traditional Tatar food the Tatar Cuisine House. Further down you will see Kazan’s first fashion boutique “d’L” and then the Russian Drama Theatre which is one of the 7 theatres in the city. In the early 1990′s Bauman street also had the city’s largest hotel. Nowadays there are only the remains of the magnificent palace style hotel left which is now surrounded by a safety fence.

Even if you are short of time, we strongly reccomend that you see the collections on display in the museum which was once the beautiful home of Kazan Governor-General Sandetsky. Some of the museum’s treasures include the XVI century Orthodox Christian icons from the city of Sviyazhsk, Russia’s best collection of Nikolay Feshin’s works, items by the world-famous landscapist Ivan Shishkin, and a marvelous collection of Russian avant-garde art of the early XXth century.